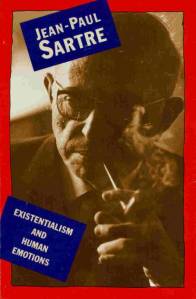 Today we have the first post from a new writer. Welcome Neal Gibson:

Philosophy? That’s just for people who have time to sit around and think. If you’re like me, this describes how a lot of people in your life think of philosophy, but there is so much more to it than that. Philosophy is part of nearly every aspect of our lives and one of the best ways this can be shown is through writing. How an author creates a world or a character or a scenario gives the informed reader a very clear picture of what message the author is trying to send; his philosophy of writing. It can be different for every book they write, but it is always there and it is something which any writer needs to take into account with their own works. I’m a student of philosophy so I am exposed to it much more than your average Joe; this helps me see the philosophies behind many classic novels and plays. To name just one example which I recently studied, Existentialism plays a robust role within the framework of writing primarily seen during the post-World War Two era and afterwards, although its early stages took root long before the war. As a philosophy, it can be seen perhaps most notably within the works Sartre, Dostoevsky, Nietzsche and Camus (although there are many others); and while Existentialism may be present as an overall philosophy behind their respective works, they each had their own personal philosophies of writing.

When I begin writing a story or a paper or really anything, I always sit down first and decide what my core ideas are going to be. If I’m writing a story I ponder how I want to portray good and evil, which characters are going to provide a moral compass, and what I want the reader to learn from the story (whether we like to admit it or not, every story we see or read teaches us something and some lessons are better for us than others). What underlying beliefs guide your characters? How will the main characters change throughout the story and what will cause these changes? These are both important questions to ask when dealing with the philosophy of a story because ideally, what you want to share with your readers is what they actually get out of reading your story.

Of course, I’ve mostly been focusing on characters so far, and yet a philosophy of writing can permeate into much more of any authors work. Tolkien’s world of Middle Earth is filled with symbolism and metaphor which allude to the deeper beliefs he held about Christianity and the world during his time of writing. Sauron, the unseen evil, is spreading a cloud of literal and symbolic darkness over the world of man. Gandalf the White arrives with the morning sun to save the day at Helms Deep. Tolkien uses the Ents and the forests to personify nature, and, in a way, show that even nature itself fight against evil. Tolkien is showing that evil is not natural, it is not something that just happens, and it needs to be fought against. The sacrifices that Sam and Frodo and the others make to destroy the evil ring, and ultimately Sauron, show Tolkien’s belief that we, too, must be willing to make sacrifices in the daily struggle against evil in the world around us. Freedom, happiness, and peace are not given freely to everyone in the world, they must be fought for and achieved.

These symbols provide a powerful tool for any author to use. In my experience, I tend to find an author’s choice of symbols within a given story to be the best marker for understanding their philosophy. Many authors use darkness to symbolize evil, and rightly so, but if an author chose to symbolize light as evil what might that say about his view of evil? Context is obviously important, but I would likely take it to show that evil likes to mask itself as something good or illuminating. Did not the Serpent tempt Eve in the garden with the fruit by explaining that it would illuminate the world for her; that she would become like God. Evil is rarely so overt as to be darkness: it often comes to us as a blinding light that gains our trust before it leads us over a cliff.

Tolkien was a master of symbolism within the realm of Middle Earth, virtually everything he created served as a symbol for something, and, in some cases, multiple places or characters represented different aspects of the same thing. For example: Gandalf, Aragorn, and Frodo all represent different aspects of the Christ. Gandalf had to die to stop evil from destroying mankind’s last hope and was reborn. Aragorn is the rightful heir of Gondor, the greatest of the kingdoms of Man, but he forsook his throne to become a lowly ranger, quietly defending the lands of mankind from enemies until the time has come at last for him to return as King. And of course there is Frodo who is chosen to be the bearer of the source of evil; the one ring. It is his job to take this burden, which man cannot bear, and destroy it for their sake, and he does so willingly, by his own choice, because he knows that there is no other way.

I have only briefly touched the many aspects of symbolism that manifest Tolkien’s philosophy of writing, but I hope that by showing some specific examples of his choice of symbols I have given you the tools for understanding how effective symbolism is for giving deep meaning to a story, appreciating many wonderful works in a new and exciting way, and applying symbolism to your own writing in a meaningful and thoughtful way to best express your philosophy of writing.