Today’s post STILL isn’t a continuation of my post from two weeks ago about violence in fantasy books, but I swear upon my honour as an Englishman* that I do actually have two more posts planned out, and I’ll get back to them eventually. This week there was something more important to talk about.

A few days ago I ended up having a brief Twitter exchange with Kameron Hurley, the Hugo Award-winning author of the God’s War Trilogy, and more recently, the Worldbreaker Saga. (Her work is wonderful; I’m reading The Mirror Empire at the moment, and I can heartily recommend it). 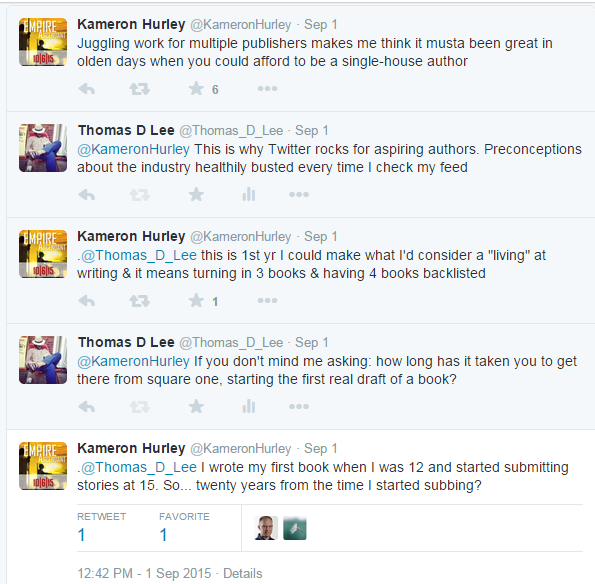 Despite what I’d just said about loving Twitter’s great capacity for busting misconceptions, and showing aspiring authors the (often harsh) realities of life as a professional author…that last tweet really knocked me for six, when I first read it.

I know that authors come in all shapes and sizes, and Hurley’s experience is hers alone and can’t be taken as representative of how long it takes for every professional writer to get from square one to the point of living off their writing (if they ever do). I also know that a lot of authors don’t see any success or publication until later in their lives, when they’ve had decades to hone their craft, build up some confidence, and work out exactly what they want to write about. Others have breakaway débuts which give them a lot more basis for living off their writing from a slightly earlier point in their career. I wasn’t naive enough (or confident enough in my own writing ability) to think that I was going to be one of those early breakaways, but Hurley’s tweet still threw me.

Unlike Hurley, I’m not personally the kind of writer who has been reeling off short stories since I was twelve, writing standalone pieces and polishing them to a sheen so that I could submit them to competitions and journals. I’ve started drafts of several larger stories, but they’ve never crept beyond a few thousand words until the last five months or so. When I was fifteen, I had an entire book series planned out, but I fell out of love with the idea when I grew up and realized its juvenility. In fact, the largest body of writing that I’ve ever produced is probably the varied exploits of a Romulan named Xon, my character in a text-based Star Trek role-playing game to which I devoted almost every evening from the age of twelve upwards until I went to university. I don’t have much experience of finishing stories.

It’s only now – with my first draft bubbling over like a saucepan full of pasta left on the hob and forgotten about while playing air guitar on the sofa – that I’m starting to feel like I’m on the road to publication, somewhere in the distant future. But the idea that I might still have twenty years ahead of me – or more, given that I’m starting later than Hurley did – made the road seem to stretch out in front of me. If I was Frodo walking wide-eyed out of the Shire, then Mordor had just shrunk even further away into the dim horizon, and some jerk-ass goblin king had just liberally sprinkled a few more flesh-eating spiders along the road.** It was enough to make me question why I was leaving the Shire at all.

Perhaps this was an overreaction. But I think a large part of my trepidation comes from my lack of aspiration to do anything with my life other than write. I have sometimes strayed into the territory of letting myself think that my day-to-day copywriting jobs are a necessary evil that must be temporarily endured to keep the wolf from the door, “until I’m published.” During my wilder flights of fancy I sometimes find myself assuming that I’ll be published within the next half-decade. But in reality it might take much longer than that, and even after I’m published, I may have to keep working jobs like this for the rest of my life to support my writing.

And that thought frightens me. How long, I asked myself, does fate or god or the Easter bunny or the vast uncaring cosmos expect me to continue in an unforgiving and unrewarding 9-5 routine, with few perks and fairly insubstantial job security, followed every evening by six hours of solid writing, willing myself not to check Facebook or play Skyrim, and prioritising my writing over things like staying fit and healthy, or maintaining friendships, or – heavens forbid – pursuing an active lovelife? It seems exhausting. Worse, it seems unrealistic. I began to question whether or not I’m cut out for being an author. But what else was there?

Whilst I was contemplating this, feeling weary before I’d even started down the long road to Mordor, Hurley sent me another tweet. It felt a little like the social media equivalent of Galadriel handing me the light of Earendil. 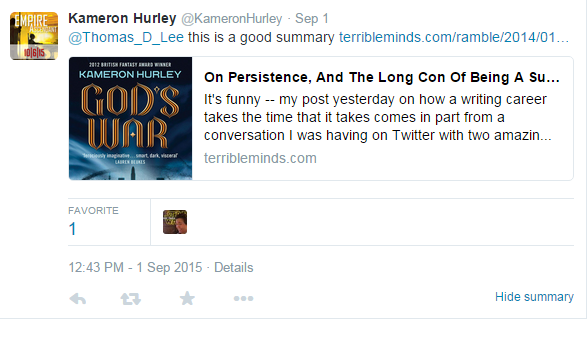 For those who’ve never read it, here is Hurley’s story of her career as a writer, the hardships she’s faced along the road, and the persistence she’s needed to get up every day and keep writing. I can’t put it any better than Hurley did, but I thought I’d be a good little disciple and share her wisdom with all of you.

I think it’s good for all aspiring authors to wake up and smell the roses, and shed any false ideas that being an author is a glamorous or an easy job. Persistance doesn’t just mean banishing our doubts and having renewed faith that everything will work out okay. It’s not an excuse to go back to procrastinating and swanning about calling ourselves authors, letting our wordcounts gradually rack up whenever our muse is willing. That won’t achieve anything. It means writing every day with a monastic dedication, being our own bosses, finding jobs that give us the time that we need to vigorously pursue our passions, and pursuing them anyway even if that time isn’t granted to us. It means being willing to make some sacrifices.

* I dearly hope that you haven’t known very many Englishmen…