It was nice to see that my post from last week encouraged such vigorous debate in the comment section. I’m planning to write a whole series of posts on the ethics of violence in fantasy fiction, and I look forward to seeing everyone’s views on future posts as well, but – alas –  various things stole my time this week and stopped me from writing an immediate follow-up.

Instead, I hope you will accept the offering of a little glimpse into a world that I came up with a few years ago outside a castle in Germany. I think a lot of fantasy writers will sometimes conjure up an idea for a setting which they love, and which sticks with them, even if they never actually knuckle down and write more than a few stories set in that world. This is one of those worlds, which has been on my back-burner for a while, lurking in a dusty desktop folder with a collection of other half-worlds, tempting me to abandon whatever book or series I’m writing and dive back into it. This little scene is the kind of thing that happens when I do. I hope you enjoy! 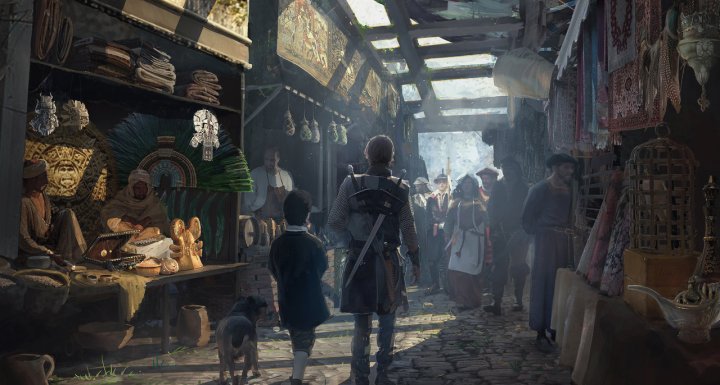 The court of Sherrington, the self-styled king of the landless masses, filled the valley. March thought that it must once have been a great city of the old empire. The streets were sheltered by a patchwork of many-coloured awnings and tarpaulins, rising like circus tents over the bazaars, but beneath the sea of drapery were the bones of grand old buildings. Whichever country had claimed this city as its capital must have suffered greatly in the war, though few people – if any – still knew or cared which side it had fought on, or why. Such thoughts were very unfashionable in Sherrington’s court. He was known to sit atop a golden throne in a great library, surrounded by trees that had grown in the sunlight which came down through a large hole in the domed ceiling, a hole made by some huge mortar shell during the worst of the fighting after the lines broke and the war ran wild. The landless masses barely noticed the old ruins anymore. They danced in the fallen masonry, read palms and sold trinkets from stalls built amongst the rubble, and slept in common dens in the attics of bombed townhouses after nights of drunken revelry. Sherrington threw famous parties in the former halls of Archdukes and Grand Palatines whose titles had healthily expired.

March felt hungry, but he didn’t know if it was real hunger or mere longing to be in the court again. He strained his senses to compete with the sounds and smells of the Amberline, the throaty beat of her Maybach engines and the synthetic smell of luftgas as Aurélie vented the gasbags, sacrificing precious buoyancy for their long descent towards the aerodrome. March longed for the scent of spice and the nasal sound of gourd flutes, the murmur of mingled tongues for miles around him. Down there, beneath the gaudy covers of the streets below, the light on the old walls and the colours of a hundred faces changed from blue to green to orange with the passing of the hours, as the sun passed through the sky and shone through different sheets of silk. March stood on the portside gondola catwalk, wind in his hair, rapping his cracked knuckles on the railings and itching with impatience. He knew that the crew were as eager as he was to to peel back the rainbow covers and lose themselves in the backstreets of the Court of Wonders, filling their lungs with the sweetness of incense, running their hands over spools of fabrics that they couldn’t afford. Little Minnie couldn’t wait to feast her eyes upon the street dancers, the fire breathers, the sword eaters and snake charmers. Gunny Mac, Wuthers and the other gasbag hands were more interested in the city’s thriving trade in food, wines and women from beyond the Eastern Weld. Aditaya was determined to scrounge some new cam bearings from somewhere, even though she knew that the court didn’t offer much in the way of airship parts. March smiled at the thought of her rifling through baskets of fine cloth in search of treasures smeared in axle grease.

Something weaved between his boots, and March sniffed with mirth. He knelt, hearing his bones creak, and scooped up Nudnik before he had a chance to live up to his name. The Amberline was mere minutes from tethering up and yawing in, and somebody might kick the poor cat overboard during the routine chaos. They were already circling the aerodrome, waiting for one of the monks on the ground to toddle over and run a red flag up the mast, giving his blessing for the ship to approach. March cradled the cat in an affectionate silence, scratching the back of it’s neck in the way it liked, and listening to it purr. Wheels turned in his head. Once the Amberline had tied down and her cargo of ermine pelt was sold, he would have no pressing business in the city. It had been a long flight down from the Rus, with foul weather and sparse comforts onboard. And it had been too long since he had surrendered himself to the warm embrace of chance and joined a band of strangers for a midnight carousel through the court’s innumerable drinking holes. He would dance, he would laugh, he would eat curried goat, perhaps he would even find a willing young man to spend the small hours with. He fancied that he wasn’t too old, yet, for that sort of thing. Not quite. Sunlight would find him in an unknown garret full of scented hammocks and divans, to spend the morning around a hookah pipe, drinking green tea and trading philosophies with new friends. Then he could return to the ship with his spirit renewed, and decide where they would fly next.